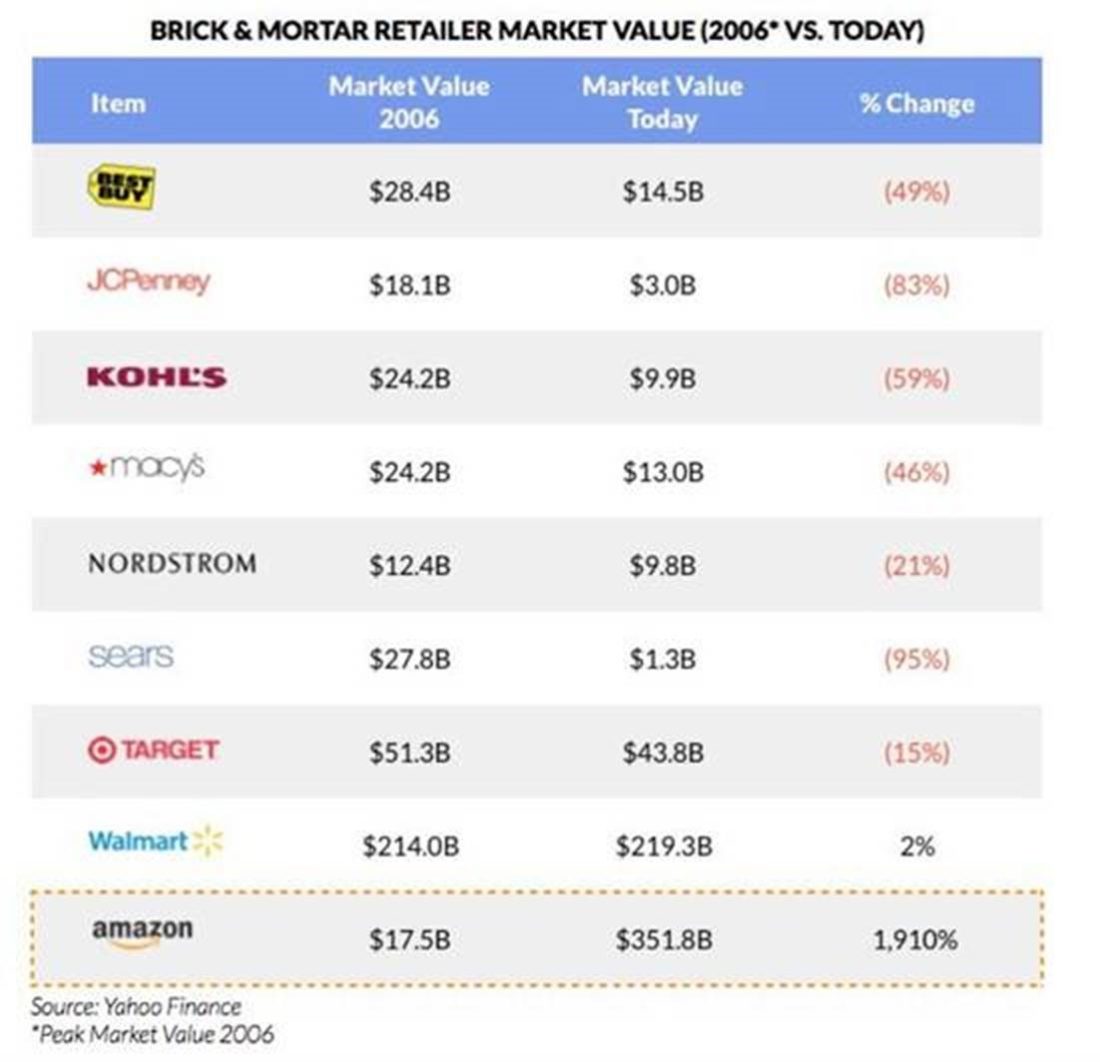 A newly released recap of 10 years’ market cap history for key retailers provides an insightful snapshot of how major shifts in purchasing behaviors have impacted retailing during the last decade.  While the slide in value is easily understood in some cases, in others the sheer size of the decline is surprising. 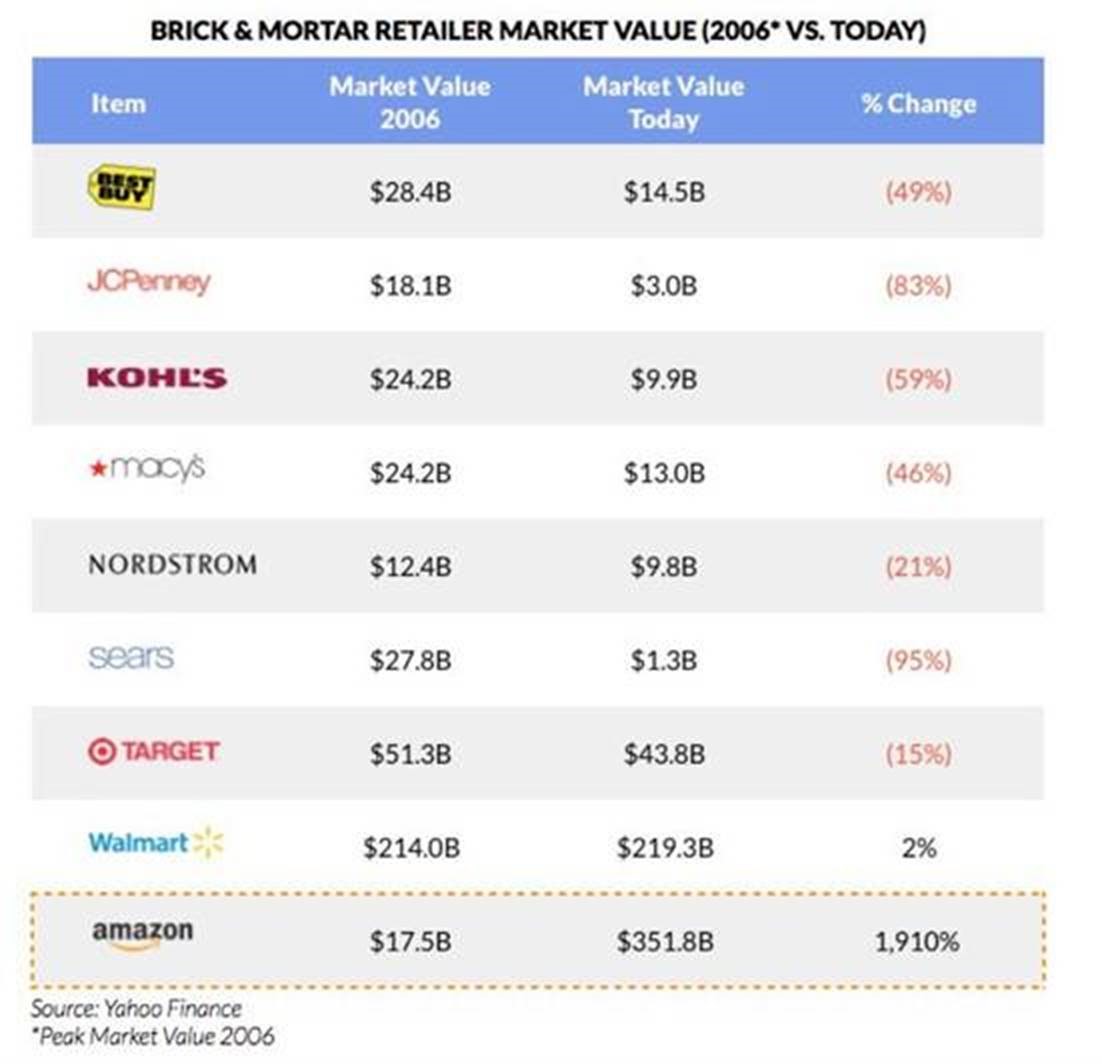 We aren’t going to comment on how the market values retail companies today.  Nor are we going to comment on the discrete drivers that in some cases are unique to the retailer – these have been covered before.  However, there are some common denominators that contributed to the declining market cap of these retailers and will continue to intensify in the years ahead…

The Great Recession and the New Normal

In 2006 the economy was still going strong, but as the recession hit, both consumers and retailers pulled back significantly, and these changes have been long-lasting.  For consumers – including the increasingly important millennial shoppers who came of age in this economic environment – the recession led to mostly negative outcomes. Underwater mortgages, over-extended credit card debt and exploding student loan balances have each put downward pressure on consumers.  Post-recession, consumers continue to cut back or scrutinize any discretionary spending.  Many people demonstrate different priorities, including more caution about managing debt and a shift to spending more on experiences than stuff.  (Chain Store Age just reported that 20% of total holiday expenditures went to experiences.)

For retailers, over expansion and an influx of new competition during the period prior to recession resulted in a decade of contraction that continues.  Many retailers have disappeared into the “Black Hole”(1)  and for those still in business, challenges remain to rationalize their overall real estate and drive productivity in all channels.  Neither are easy or quick fixes.

As competition intensified and consumers became cautious, retailers frequently added promotions of all kinds to compete.  That delivered quick results, but didn’t build better solutions for consumers – just cheaper ones.  And, all too often promotions only resulted in declining margins, and retailers found it is hard to reverse course once heading down that slippery slope.  Further, as ecommerce, mobile and social commerce have grown to high single digits or more of total retailer sales, productivity per square foot of store space has declined and digital channels haven’t broken even.  Often, retailers didn’t take proactive steps early enough to reduce the number or size of stores, and now find traffic, productivity and profits harder to generate.

Consumers are Increasingly In Control (and Know It!)

As commerce has become increasingly digital and devices for access nearly ubiquitous, consumers have access to wide sources of information and choice.  It’s hard to recall that in 2006 we didn’t have little computers in our pockets, and often went to a store to get all the information we wanted before making a purchase.  Today, smart devices connect us 24/7 any place we go, allowing us to find what we want at the best combination of price and solution.  Retailers who invested early in ecommerce increasingly leave the more traditional digital laggards in the dust.

And then there is Amazon

It’s almost “enough said”.  But we can’t let it pass without noting that Amazon has increasingly sought to reduce friction in the shopping and buying process while offering ever more interesting and valuable solutions.  Those avenues are open to all retailers to pursue – it requires a willingness to admit that what used to work may no longer and what works today won’t be enough tomorrow – and then to take action.  But there are a great many wonderful retailers and smart retail executives who are being innovative and willing to test and take risks.  While the list of most successful, most innovative and most prosperous will no doubt change in the coming decade, we remain confident there will be a vibrant retail industry still with us in 2026!