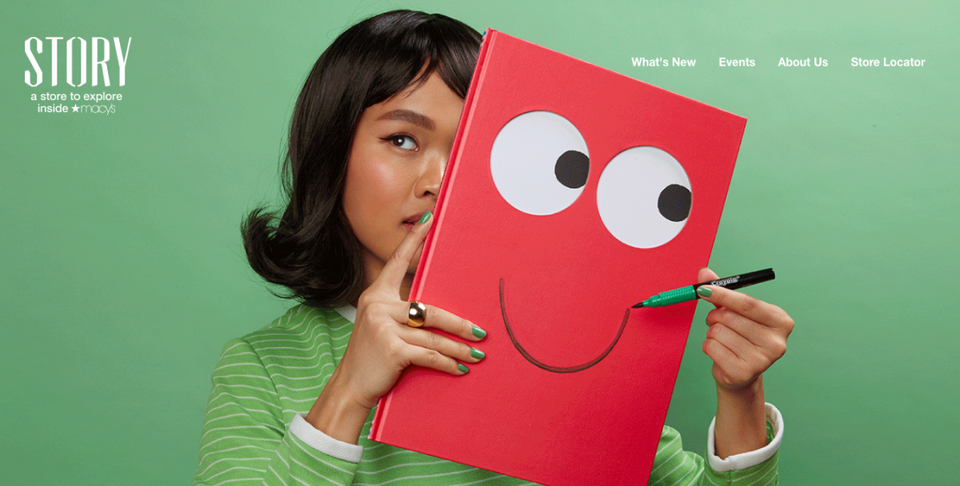 STORY – a concept described as “narrative retail” –  opened in 36 physical Macy’s locations last week. Curiously, there was no digital opening.

Narrative retail presents a theme-based, curated assortment that is reinvigorated with a new story every two months. It is meant to generate traffic, enhance the Macy’s brand and produce a reasonable amount of sales.  STORY’s opening theme is COLOR – with products, displays and scheduled events all celebrating the hues of our lives.

We visited STORY at two Chicagoland locations – the downtown State Street Macy’s and at Woodfield Mall. Neither location matched the description or pictures we saw of the Herald Square location. But they weren’t bad. At Woodfield, Story displaced the Coach handbag assortment on a prominent pad near the escalators. Two sales associates were happy to speak with consumers, the navigation was clear and I learned about future events.  There were fun gift giving items to buy under $30.

STORY’s physical execution turned out alright.  But there is a huge hole in Macy’s STORY strategy.

1) The STORY assortment is neither presented nor shoppable as a collection on Macy’s desktop website, mobile site, or app.

2) Macy’s desktop and mobile site feature an introduction to STORY, but the app does not.

3) No result appears if a consumer searches for STORY on the mobile site or Macy’s app.

4) If a consumer searches for a key item from the concept – the Levi’s X Crayola jean jacket, for example – you can find it on Macy’s site – but the product page has no tie-back to the STORY concept.

6) And at Woodfield, once the largest mall in America and still a powerhouse, there was no instagrammable location within the STORY pad.

Macy’s goal may be increased store traffic and brand awareness – but a digital-lite strategy will not have the impact Macy’s needs. Nearly 600 Macy’s stores will not have STORY shop-in-shops. The 36 that do will not look as good or have the impact that the execution in Herald Square presumably has. The instagrammable moments there look fun.

A strong digital strategy and investment including shoppable collections could introduce STORY to a much broader audience, drive purchase, drive visits to the store, drive add-on purchases during a BOPIS transaction, and ultimately have a greater impact on Macy’s.

We hope this move comes in the future.