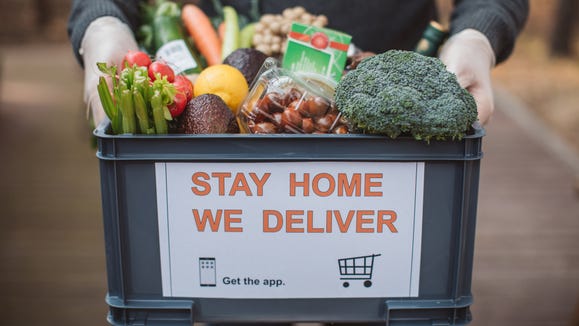 There’s nothing like massive disruption to accelerate a trend that was already occurring in the market.  In this instance, a global pandemic the likes we’ve never seen before has caused significant change in the retail landscape. While grocery stores have remained open and fared better than any other retail segment during the crisis, e-commerce grocery sales have also accelerated at an unprecedented level that has changed the game, likely irrevocably for supermarket retailers.  For many customers, it is easier (or safer) to purchase on-line for delivery or contactless pick-up.

At the same time, e-commerce for grocery has also had an awkward coming out party. While services such as Instacart are literally hiring hundreds of thousands of new employees, the surge in demand has revealed significant cracks in the system along with the difficulty of scaling the business. Wait times for getting a slot for an order have sometimes exceeded four or five days and order fulfillment rates have been abysmal as supermarkets wrestle with out-of-stocks driven by the massive surge in demand. So, while more consumers are turning to e-commerce, they are also seeing it at its worst.

As I’ve written several times before, there are multiple reasons why the grocery category has historically been well under-penetrated relative to other e-commerce categories. Multi-temperature products, awkwardly sized and shaped products, product and SKU proliferation, delivery challenges, combined with razor thin margins have kept e-commerce penetration to around 3-4%. However, this penetration has likely tripled in the past six weeks and we are probably around 10% penetration today. And while some of these gains may be given back in a return to normalcy, it is also likely that the new normal will feature a much higher e-commerce penetration rate along with continued growth. While 15% e-commerce penetration for grocery used to have a “best-case” scenario of happening by 2025, this is much more likely to happen and perhaps several years sooner.

But, and it’s a big but, profitability and an excellent customer experience remain elusive. In-store, in-aisle pick (the primary method for Instacart and Amazon Prime Now) will always be less efficient and have poorer in-stock conditions associated with it than fully automated centralized solutions (as represented by the Kroger/Ocado partnership). But, that model is expensive and time consuming to build and takes time to maximize efficiencies.

As I’ve discussed before, a number  of technology companies are deploying efforts to find a middle ground. Referred to as MFC’s (micro-fulfillment centers), they combine robotics and automation in a much smaller space. This allows them to be less costly to build, be located in a back room of an existing store or dark store which provides closer consumer access, either for delivery or pick-up. Takeoff Technologies, one of the leaders in the field, just published a white paper entitled “How to Win in Online Grocery” that discusses the trade-offs between price, variety and speed that retailers will need to balance to win. They argue that MFC’s optimize that relationship. Along with Takeoff, other technologies include Autostore, Alert Technologies, and Fabric. While all have pilots underway, expect an explosion in the use of this technology as grocers gear up for the new level of e-commerce sales.

At the same time, while delivery has been the dominant way to get groceries to the end consumer, the cost and complication will have limitations. Led by Walmart, we would also expect curbside, contactless pickup to grow significantly as customers and retailers adapt to new realities.

The ways that COVID-19 will impact the world of retail are just beginning to be felt. Long-term social distancing, restrictions on customer counts and a less comfortable shopping environment will hasten even further e-commerce adoption.