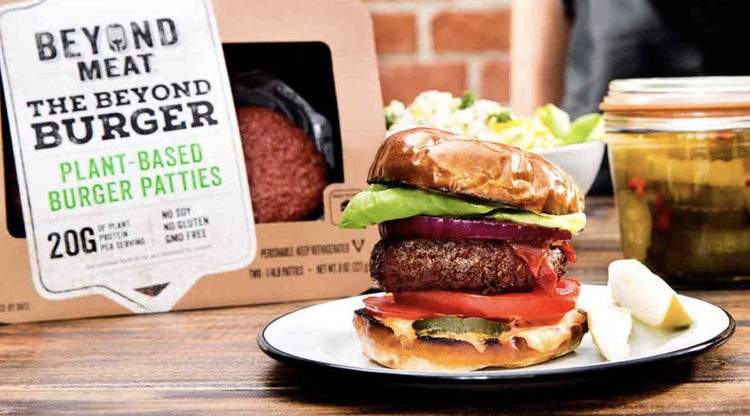 Aisle be seeing you: Why retail placement is so important to plant-based substitutes

Beyond Meat and other plant-based substitutes have made placement in or near the fresh meat case a major part of their marketing message, so much so that Beyond Meat’s filings with the Securities and Exchange Commission point out that proximity to the meat case has a material effect on its sales.

With all the publicity and news coverage of this growing new market, actual location in the supermarket wouldn’t seem important; interested consumers – which is most of them – will find what they’re looking for. But there is more to this dance between retailer and supplier, as Amanda Lai, senior consultant with retail consultancy McMillanDoolittle, pointed out in a conversation with The Analogue Dish.

The Analogue Dish: Beyond Meat and other brands, like Before the Butcher, have made a big deal about being near or in the meat case in the supermarket. Besides the obvious connection they want to forge with the meat case in consumers’ minds, what are the underlying levers that they’re trying to pull when they merchandise their products that way?

AMANDA LAI: If we’re looking strictly at merchandising over the years, the category has grown extensively from an R&D standpoint. Plant-based protein now imitate the taste, texture, appearance of meat. The challenge is getting consumers who were turned off by the old, bland meat alternatives of the past to try the new and improved iterations of these products. This customer doesn’t necessarily shop in the vegan and vegetarian section, but they can be found shopping in the meat department.

And so you’ve got the Beyond Meat packaging and product itself looking similar to other products in the meat section. That gives the brand credibility, that it can be cooked and consumed like any other type of meat. A customer might very well go to the meat section and pick up Beyond Meat without realizing they’d purchased a plant-based product, due to how similar it looks, cooks and tastes like conventional meat.

From a marketing standpoint, they’re pulling a couple different levers. ‘Plant-based’: that term is new. It’s not a new concept, but usage of the term ‘plant-based’ has risen in popularity in recent years. Whereas ‘vegan’ has notions of exclusivity and what you can’t eat, the term ‘plant-based’ sounds a little more inclusive, familiar, and is viewed more as a broadening of one’s tastes rather than a limitation of them in the way that ‘vegan’ might sound.

And then lastly, it’s getting to the science of it with the nutrition. Traditionally, we often view our food intake as symbols of the food groups, meat, vegetables, dairy and so forth. Beyond Meat’s CEO, Ethan Brown, wants consumers to think beyond these groupings and consider the science behind it. When you view nutrition through the lens of proteins and amino acids rather than just broad food groups, you can see that there are options beyond traditional meats that can be just as satisfying and fulfill those nutritional needs and also be more sustainable.

AD: Sometimes the retailers have put the alt-meat products in the meat case and sometimes they haven’t. I understand that there is nothing contractual that requires them to merchandise these meat substitutes next to the actual meat in a meat case. But from the retailer’s perspective, how do they go about making that decision as to where to place these products that really don’t have a category of their own?

LAI: From the retailer’s perspective, they’re ultimately juggling multiple relationships. You’ve got the tried-and-true purist consumers who are shopping in the vegan and vegetarian sections, that are disgusted by the idea of going to the meat section for their plant-based products. We also have retailers needing to maintain their long-term relationships with the largest meat suppliers in the country, who will now be squeezed on space by entry of these newcomers if they do go in the meat department.

There is also an emerging consumer segment of flexitarians and meat reducers who do not necessarily view plant-based products as an abandonment of meat altogether, the way that a vegan or a vegetarian might see it, but as a broadening of their existing eating habits. So, ultimately a retailer’s relationships with the purist consumers, with their long-time suppliers, and along with it all the financial implications, are at risk in this attempt to appeal to these new consumers. And are these new consumers going to pay off and make that a change worth making?

AD: From the point of view of Beyond Meat and these other brands, they’ve made a very public request that they be merchandised in this way and retailers have not always gone along with that request. What does that then mean for the plant-based supplier? Is Beyond Meat better served to kind of go along and get along with the retailer’s decision if it’s counter to their merchandising request?

LAI: What’s important with Beyond Meat is that they’re really taking a stand in their mission. It’s a huge gamble for them. The main focus behind Beyond Meat is on ultimately saving the planet, and retailers that kind of rebuke this can be viewed as closed-minded and unchanging by not necessarily accommodating such a public, mission-driven request. Beyond Meat, they took this dedicated stand to only go under retailers who would merchandise them in the meat department, and so Whole Foods was the first to really take that chance with them.

After seeing their success we see conventional retailers, such as Safeway and Kroger, Wegmans, Target, also following suit. That is indicative of the start of a general trend that plant-based products are becoming more mainstream. Those that may have rejected Beyond Meat early on might now be a bit late to market and might have potentially fallen behind others that did decide to take a more forward-thinking risk in the product assortment and merchandising.

AD: Are there examples from other parts of the store, other products, where this might be a parallel? Or is this sort of merchandising push by Beyond Meat unique?

LAI: The best example that is similar to Beyond Meat’s case is the plant-based milk alternatives category. Dairy alternatives sales really didn’t take off until they were able to get themselves out of the aisle and into the refrigerated dairy section where they could be perceived as, in consumers’ minds, another equivalent form of milk.

AD: We’re seeing bigger brand names, and Tyson is the latest, moving into this space. Would we expect Tyson to also say, ‘Okay, put our plant-based products next to the meat products?’ Or do we think that Tyson might handle its Raised & Rooted brand differently?

LAI: I would expect Tyson to follow a similar strategy to Beyond Meat and request space for their new plant-based products next to their existing products. To adapt in a competitive category and adapt to changing consumer habits, companies like Tyson are strategically shifting their position from being ‘meat’ companies to becoming, more holistically, ‘protein’ companies.

Since Tyson already has a strong reputation and high brand recognition within the meat department, it would strategically benefit from positioning their plant-based products adjacent to their meat products and create this strong, centralized point for them within the grocery store. Beyond Meat and similar companies are leading the charge in repositioning the entire meat department into a protein department in all its many forms, and this is forcing larger players, like Tyson, to react.

It’s interesting looking at Beyond Meat and the risk that they’re taking. Essentially it was an all-or-nothing decision to seek out placement in the meat department. They made a choice to forego sales that could have easily been achieved in the vegan and vegetarian sections to go after a larger piece of the pie in the greater population as part of its dedicated mission to change consumer perception of meat as an animal product alone.

They’re really pushing to broaden the definition of how we perceive meat, and are really looking to find ways to provide meat in a way that takes the animal out of the equation.

Amanda manages McMillanDoolittle’s food retail practice and supports strategic planning, retail concept development, consumer research, and real estate analysis for a wide range of global retail clients. Since joining the team in 2017, Amanda has worked with brands across the Grocery, Restaurant, Apparel, Consumer Electronics, Automotive, and Real Estate sectors. She has been featured as a subject matter expert on TD Ameritrade, CBS News, and Chicago’s WGN Radio, and has been quoted in publications including The Chicago Tribune, Crain’s, Progressive Grocer, Drug Store News, and Convenience Store News.