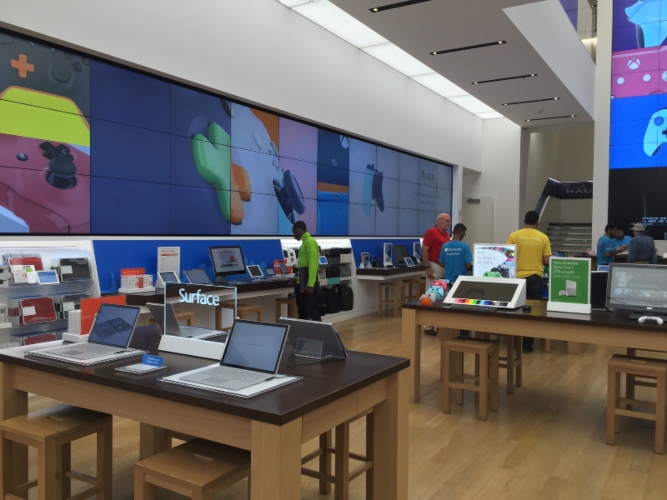 Microsoft Exits Retail: What Are The Implications For Other Brands?

A bit lost amid the wave of bankruptcies and massive announced store closures are some notable brands who are exiting the retail business. Microsoft announced that they are closing all 83 of their retail stores, both in the US and around the world. They will be taking a $450 million charge associated with this move.

Earlier in the year, Bose made a similar announcement with the planned closure of 50 of their locations, essentially shutting down their physical retail presence. Bose stated that, at the time of opening in 1993, “it was a radical idea, but we focused on what our customers needed, and where they needed it – and we’re doing the same thing now,” essentially suggesting that on-line sales are now a better way to serve customers.

For Microsoft, the ambition was even greater. First opening in 2009, these stores were designed, explicitly, to compete against Apple, down to their location strategy and visual design cues. Besides mall-based retail, there are some massive Flagships in markets like New York and Sydney that match Apple’s physical grandeur. The challenge, then and now, was to define Microsoft, a far-ranging brand selling everything from xbox to operating systems to notebooks. Close your eyes and it is easy to envision what an Apple store should look like. This is a much harder exercise for Microsoft. And, to be fair, their brand portfolio is moving towards a greater digital offer away from physical products.

As physical retail still reels from a global pandemic, an open question is what is the future role of physical locations for brands? While these two brands are closing stores, others are doubling down on physical locations.  D2C brands, like Allbirds and Glossier are adding retail because it is an additional channel (and often a lower cost channel) for building brand awareness and customer acquisition.

Nike announced today that they are expanding their Nike Live small footprint concept to as many as 200 new locations across North America. Along with their House of Innovation Flagship stores, physical retail remains a core pillar of their “Consumer Direct Offense” strategy.  We expect to see other brands making similar moves – transitioning to smaller formats or shop in shops while building out Flagship experiences in a few high impact locations.

Steve Jobs told analysts back in 2001: “Retailing is hard.”  It’s much harder in 2020 with channel proliferation, a pandemic and rapidly escalating customer expectations. Yet Apple continues to view the physical retail locations as important consumer touchpoints to connect with the brand in its purest form.  Like Nike, they have invested in retail as a core growth platform along with the investment in talent and executive focus needed to make physical retail a success.

Rather than exiting physical retail completely, brands now need to reassess the role of stores including pop-ups, flagships, specialty formats and other emerging formats in their portfolio of options for growth. It is not unreasonable to expect that physical retail could re-merge for Microsoft, particularly focused around a particular sub-brand or product line.

Whether this particular announcement is related to the pandemic or specifically to the shift to a digital world, 2020 is shaping up to be the most volatile time for physical retail stores in history. Buckle up because more is likely to come.