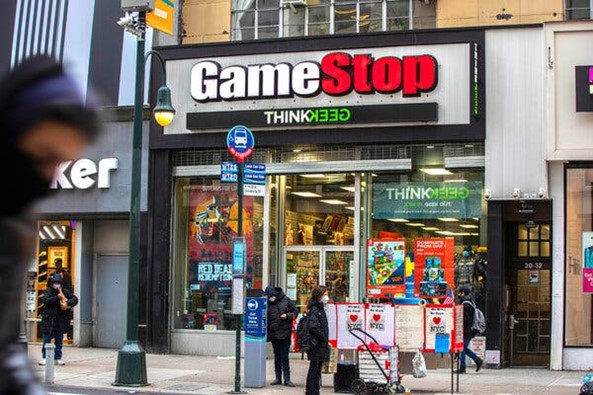 Earlier this week, GameStop Corp. (GME) was the most traded stock on Fidelity’s trading platform. Everyday traders, driven by Reddit and social media hype, have been piling into the stock, while Wall Street insiders with massive short positions that assumed it would fall have been getting clobbered. GME shares are up over 1,500% since Dec. 31, 2020.

Prior to GME’s recent rise, the stock had been on a downward trajectory for years as video gamers began to shift tastes to online, downloaded games. Wall Street traders were mostly short sellers, meaning they were expecting the stock to continue to plummet.

According to InvestorPlace, GameStop’s surge is a fascinating example of a “short squeeze.”  When traders “short” a stock, they borrow shares of the stock they think will fall over a given timeframe. If the stock drops, they give back the shares and collect the difference between the initial borrowed price and the actual sale price. But if the borrowed shares unexpectedly increase in price, the trader now has to buy back the shares at that higher price. The closer the time gets to the expiration of the short trade, the more the trader stands to lose.

Often, short traders start to close their positions immediately to limit losses, meaning they start buying shares in the company. However, a sudden surge of rapid buying from short sellers ends up increasing the price of the shares in what’s known as a “short squeeze.”

Contrarian investors then began to take long positions in the stock. Remember “The Big Short”!

A recent industry report warned shares in GameStop were dangerously short. At one point, more than 125% of the company’s tradable shares had been borrowed and sold short. This made the stock the most shorted on the U.S. stock market.

Is GameStop a buyable stock? The reality is the stock is too volatile, and it doesn’t pass most fundamental screens. Expectations for future earnings do not come close to justifying the current P/E multiples. Buy at risk…my bubble blower is in hand!

Is GameStop a long term retail winner? We could speculate there is a plan underway to transform their tired stores into engaging and convenient experience hubs or pick-up points for DTC players. But, even with Chewy co-founder joining the GameStop board, we don’t believe GameStop as is to be a long-term retail winner. Remember Blockbuster Video. Short covering should never be confused with real strength or a winning retail position.

Will Ander is a retired Senior Partner of McMillanDoolittle. Prior to retiring he worked with a number of retailing and service businesses on strategy and new store development, feasibility and concept assessment, and retail best practice studies. Currently, Will enjoys traveling with his wife, Vera, and spending time with his grandchildren.