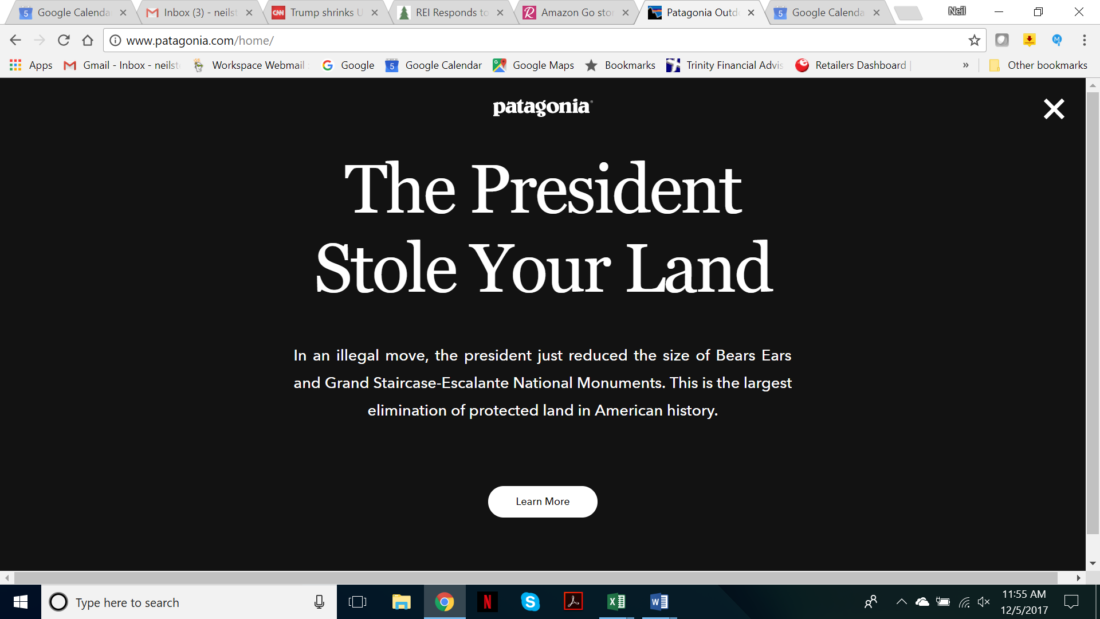 Patagonia Gets Political: A New Era of Retail Activism?

The year seems to be ending as the year began: with retailers wading (intentionally or unintentionally) into the political fray.

Earlier in the year, Nordstrom incurred the administration’s ire by dropping Ivanka Trump’s shoe line, leading the president to weigh in, “My daughter Ivanka has been treated so unfairly by Nordstrom,” and setting off debates on exactly what role should a retailer play in politics. Historically, this answer is relatively simple — retailers sell stuff and should be agnostic when it comes to politics.

But the world is no longer so simple. Consumers are looking to align with brands that share their values, and the government (particularly the current one) is no longer content to be a neutral commentator. So, intentionally or otherwise, retail has become politicized. Organizations like #Grabyourwallet list 80 companies to boycott, for offenses ranging from carrying Trump-branded products to advertising on networks like Fox News or specific programs like “Hannity.”

Throughout the year, there have been many examples of direct or indirect commentary. The venerable Tiffany’s sent a direct message on climate change.

The latest dust-up comes over the protection of federal land. Patagonia has made the strongest response. “I’m going to sue him,” Yvon Chouinard, founder and CEO of outdoor gear maker Patagonia, said of President Trump, who moved yesterday to reduce the size of two national monuments in Utah. “It seems the only thing this administration understands is lawsuits.”

And Patagonia’s website is dark today with the following statement: 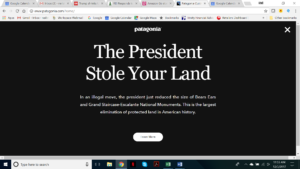 Fellow outdoor retailer REI Co-Op also weighed in by making the following statement and urging customers to change their social media profile to We Love our Public Lands.

“Today, the president announced his plan to dramatically reduce the size of two national monuments in Utah — Bears Ears and Grand Staircase-Escalante. This is the largest rollback of protected lands in American history. The decision also undermines the integrity of the Antiquities Act, which 16 presidents from both parties have used to designate and protect national monuments over the last 111 years.”

What does it all mean? We are living in unprecedented times. Retailers will likely no longer have the luxury of sitting on the sidelines. The decision on brands and retailers to take a public stand (on one side or another) carries considerable risk, as recent disputes with Keurig and Sean Hannity fans demonstrate. But staying neutral may also no longer be an option. It is likely that both Patagonia and REI will catch flak for their public criticisms — it is also likely that both retailers will solidify their support among brand stalwarts.